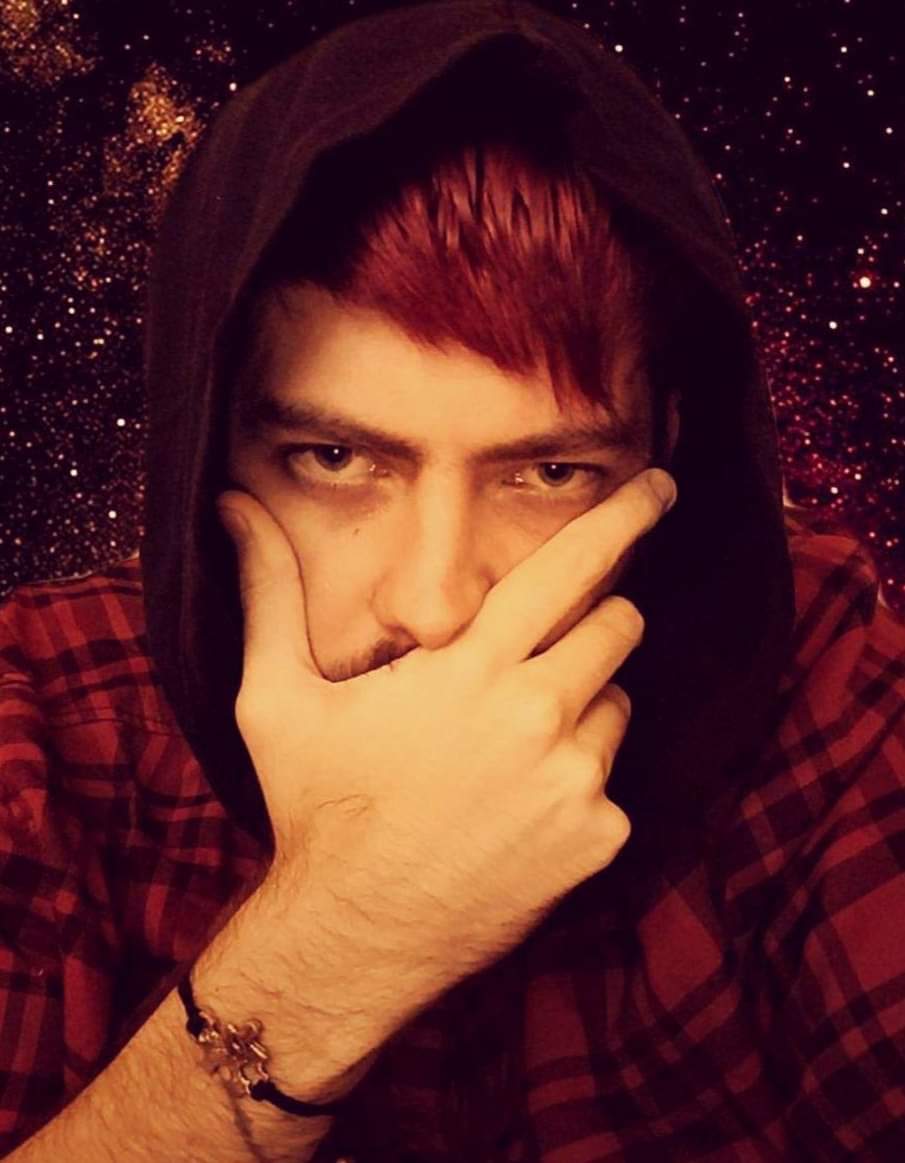 Kurtis Tripp is a rapper from Pontiac, MI but has spread his music from coast to coast, from working with local artists in Detroit to artists all the way in Arizona. Somewhere between emo and confessional rap, Kurtis is carving a new niche.

In collaboration with John Worth, he and Kurtis Tripp have united to form Ghostheart, with sounds that echo the politically conscious band, Flobots.

I speak on a lot of things: my experiences as a gay man, human rights advocacy for same sex attracted people, and the issues myself and others have faced with gender ideology.

Some will tell you that I have no right to speak about the things that I do because of my own past. And they’re aren’t talking about the “transphobic” things I’ve said while in arguments online. They’re referring to, of course, my arrest in 2018.

I was arrested for allegedly threatening to shoot a school. That’s what all the news articles and broadcasts about me say, anyway.

Yet…none of them quote what I actually said or mention what school I supposedly threatened.

That’s because I didn’t threaten to shoot a school. The media and police knew this and the author of the circulating article, Terri Jo Neff, has even commented on the story about it, admitting that the charge was overblown, but even more sinisterly: that she didn’t include all the information she had available because she knew the story wouldn’t sell.

A screenshot of Terri Jo Neff responding to my friends defending me on her story about me — where she admits the story was overblown and she left details out so that the story would sell better.

A screenshot of Terri Jo Neff commenting on her story about me in response to my friends defending me: here she admits the charges were overblown and that she left details out to make money.

No update to mention this. Then again, they also don’t mention that the charges for “threats of terrorism” were dropped, that I only faced a misdemeanor, only did 1 year of probation (not parole), and that the threats I actually made and were charged for was only ever in response to weeks long abuse by 2 homophobic straight men that were musicians in the local Michigan scene, along with myself.

They outed me and harassed myself and my husband with death threats because I started to make small waves when I first released music. The articles don’t mention that…or that I begged for help and called the police, who refused to listen…and even posted on social media in hopes someone would hear my pleas.

This is a screenshot of me posting in a leftist group I was in, begging for help weeks before my arrest.

And they didn’t quote my alleged school shooting threat because the truth is I didn’t threaten to shoot a school. I made a bad joke on Facebook in the middle of a public meltdown I had when faced with levels of homophobia I did not have the resources to handle.

I said “I’m going white boy crazy and going to shoot up a school”.

Disgusting? Very much so. Genuine? Certainly not. And a judge agreed, since that charge was dropped.

And the media knew that. They knew if they quoted what I said that no one would have taken their articles seriously. No context. Just a vague assertion that I had threatened to shoot an unspecified school.

My early termination from the judge: I was let off 2 years early from my 3 year sentence for good behavior and contributions to the local community: including headlining Tucson Pride’s mainstage in 2019.

My actual charges: a low level felony that eventually became an unspecific misdemeanor. And nothing to do with terrorism or school shooting threats.

I did threaten Cody Goetsch and Darrell Bolden, the two men that attacked my husband and I, but only in response to their threats.

That doesn’t make it right but that context does matter and they had no right to leave it out, just to make the story juicer. And I never made a credible threat to shoot a school. Owning no guns, having no criminal history, not even attending a school, and prefacing the supposed threat with “I’m going white boy crazy” makes this quite evident.

Further, the threats I did make to Cody and Darrell weren’t credible either since I owned no guns, they lived across the country, and I only said it as an attempt to scare them into stop threatening me and my husband.

The types of threats I was facing from Cody, Darrell, and their friends.

It is something I regret and I’m very sorry for the mistakes that I’ve made. I work hard every day to make up for it. But the narrative being pushed in those articles from 2018 is blatantly false.

Genuinely violent homophobes got away with their bigotry. The police and the media did everything they could to smear me, and to ignore the abuse I faced. I respect that given our current climate in America that they had to take the post seriously. That’s why I think it was appropriate for them to interview me. However, I made the truth clear and they chose to ignore it.

They were committed to railroading me, as evidenced by the way they never charged the men who harassed me, and by the way the arresting officer snarled at me that I was “a little queer” when I cried for my husband while I was in handcuffs.

It was always clear that the police were simply trying to build a case against me. In their written testimony, Cody and Darrell admitted they never even saw the threats I posted about them. They had to be emailed to them. They spent time together with the police, literally conspiring against me.

When someone reported my posts, likely as a troll, my post triggered every algorithm in the database given the keywords used…and they really thought they were being badass FBI agents stopping a legitimate school shooting.

Instead, the police operated as the strong arm for these homophobes who openly admitted they were targeting me because I was gay.

A screenshot of Cody threatening me and stating it’s because I’m gay. I faced this and more for weeks. No one, even the police would help me. No one paid attention until I finally melted down under the pressure and responded.

This is what has been stripped away from those articles. I was forced to make my mugshot my album cover and tell my story that way, because no one else was interested in telling the truth. It tells the story of my arrest, while also condemning the alt right and white supremacy, who are the groups that actually commit mass and school shootings, and who I had foolishly associated myself with by saying such callous things…and finally, who are the real American terrorists.

Some see it as problematic to “embrace” being called terrorist. Yet, I’ve never embraced it. It has been thrust upon me without anyway for me to stop it.

The title “American Terrorist” is mocking the very idea that I’m a terrorist, as you can hear in the title track, where I describe “nerfing down these hoes” to demonstrate how useless of a title that is to apply to someone who has never been physically violent towards anyone — and again in the song “Dead Eyes”, where I speak of running up in houses and hugging grandmas — and especially in the song “The Story So Far”, where I detail this whole story, including my outing, the overblown charges, and my wish to advocate for gay rights.

This is why when someone like David Paisley posts my mugshot and outdated/inaccurate articles in an attempt to discredit me, thereby furthering the homophobia I faced from those two men and the police, I can simply shrug it off: I’ve faced smear campaigns before, after all. And now, unlike in 2018, I have the resources and support network to overcome homophobia — and even this slandering.

David and people like him need the things written about me in those articles to be true. Because, what I speak about conflicts with the careful culture they’ve constructed meant to disguise their own bigotry as inclusivity. If I’m a terrorist, then what I say doesn’t matter. But I’m not, and it does.

Their movement is one which accuses others of being bigoted for their sexual orientation, for being female, for saying the word “woman”, and for discussing biological sex. The fact is, they needed my arrest because the rest of their arguments are honestly, a little lacking. At least now they have a genuine regret of mine to use against me, instead of baseless accusations of transphobia for simply existing as a homosexual man. Their movement is one in which a man scared of ribbons thinks it okay to further a homophobic hate campaign against me in the name of their harmful inclusion ideology.
I will continue to defend gay and women’s rights, and work to preserve biological sex. I couldn’t even imagine just deciding to ignore the hundreds of messages I get, thanking me or sharing their own experiences, telling me how relieved they are that they’re not alone. And they’re not.

My arrest is no longer a point of shame for me. It has been something I’ve spoken about a lot and often because of my willingness to accept responsibility and wish to do what is right. There are surely a dozen videos of me speaking on it and I’ve even written an entire album about it. I really can’t be more honest about my mistakes.

All I want to do is build tools and resources for gay people: so that other’s feel like they have somewhere to turn in the face of homophobia and violence.

There are parts the media left out and the context matters. I hope one day to convince the author of the article to update it with the truth. All journalists have an obligation to tell the truth — the whole truth.

But even if they don’t, I won’t let it stop me from speaking about these things. So, go ahead. Run my name through the mud. Run it through the blender. I’ll keep coming back. I’ll keep fighting. And the support I’ve gotten has made it clear I’m not alone.

We won’t be silenced.

It hits all major streaming platforms on December 11th. You can pre-save it here:

It's leftist, it's sexy, it's coming this January!

Update Required To play the media you will need to either update your browser to a recent version or update your Flash plugin.
Download
Back
You Tube